Atticus Catticus and why you should follow submission guidelines ...

This friend of mine Amber has a cat. Well she has two cats, but this is about her cat that is a crabby tabby. His name is Atticus Finch.

The cat goes by a number of aliases including Atty, Atticus Catticus, Weiner Muffin, Stink Box, Stink Bug, and the Jerk. When people come to her house she tells them not to touch Atty because he will hurt them. Hurt them bad. Slice them up like a melon until they bleed. This is why her real estate agent found himself dripping blood on her kitchen floor after being attacked by Atticus Catticus.

“Why would he attempt to pet the cat after you explicitly told him that the cat will go all medieval on him and bleed him out like an old fashioned blood letting?” I asked.

Do your homework or a medieval blood letting may ensue. Submit to an agent or editor who represents/publishes the writing in your genre. If you can’t figure out what genre your work is, then do some more homework and look at similar books and see how they are classified. Quell the urge to break the rules. Until, of course, you are a good enough writer to not only break them, but to rewrite them. 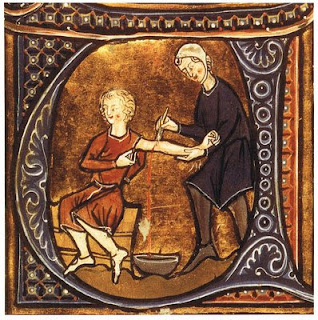 Angie said…
So, so true! We get a lot of submissions at Mindflights that don't fit our guidelines. Some of them are well-written, but they still aren't what we're looking for. Doing your homework is important!
September 10, 2009 at 8:27 PM

Unknown said…
I once knew a cat like Atticus - but I can only hope that agents and editors don't respond quite as violently! :-)
It's a funny thing about submission guidelines, isn't it, and how people always think it will indeed be different for them and as such, it's got to be worth the chance...
NickyS
September 11, 2009 at 12:32 AM

Jeffery E Doherty said…
Atticus is my kind of cat! Personality ;-) I'm sure I would try to pat him too, despite the warning.

Jan Markley said…
She sure did Sophia. And she always bugs me about not having read the book - which I should do promptly. Amber is going to do a guest blog post about inspiration soon!
August 3, 2010 at 5:45 PM