“You don’t know me, and I may or may not be a stalker …” that was my email to Marty Chan that started it all. I’d never met the dude, but had read his funny mysteries. I knew he thought he was funny but I thought I was funnier and challenged him to the Kids’ Lit Mystery-Comedy Smackdown that was held yesterday at Greenwoods' Books in Edmonton.

But first we were on the City TV Breakfast show on Friday with a beaker full of some disgusting green slime that the evil scientist Dr. Bert Talbot aka The Cheese Pie Man from my novel Dead Frog on the Porch and the science teacher character from Marty’s novel the The Mystery of the Mad Science Teacher cooked up in their lab for us. Before we went on the air the host Bridget Ryan said to me “Let’s have a little what what, and what town is this boy from!” I said: “I don’t … know…what…that… means?” And she said: “And we’re live …” So the TV spot was fun and we had a mini-smackdown.

There was an awesome turnout at the Smackdown. The judges were author Debby Waldman, and Edmonton Journal columnist Paula Simons and the emcee (or referee as she called herself) was chidren's author and storyteller Kathy Jessup. The judges made Simon Cowell-Paula Abdul-Randy Jackson like comments after each round.

For round one we both told the story of how we got the idea for our novels. Marty won that round because his story involved a sweaty gym teacher who used to yell at him and mine just involved me confessing to frogicide! 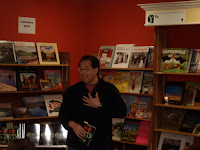 Round two was a reading of a funny passage from each of our novels. I either won that or it was a tie, I don’t remember because the thunder of the applause was dizzying. 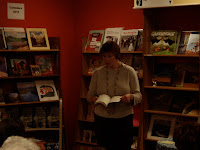 For round three we took suggestions from the children in the audience. They wrote an opening line an we had three minutes to write a bit about it. The line I pulled was so good Hot pink bike shorts aren’t good camouflage that I think I will use it as the opening of the second in the Megabyte Mystery series Dead Bird through the Cat Door. 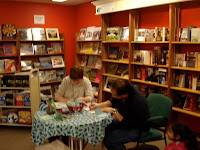 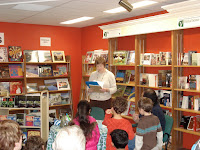 Well Marty won that round and I had to drink the green slime! 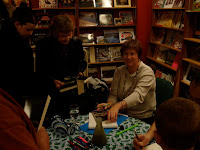 Wait a minute, weren’t both judges and the emcee from Edmonton? And hasn’t Edmonton and Calgary been playing out a rivalry that dates back over 200 years. Are those the judges and emcee in a conspiratorial huddle? Hmmmm, maybe the title of my next book will be Conspiracy at the Comedy Smackdown or Conspiracy in the Capital. 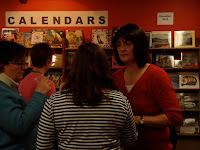 Does the word “re-match” mean anything to you Marty? 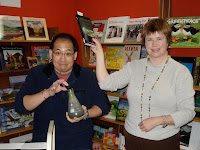 Thanks to everyone who got on board for this fun event! ;-j

Dawn Ius said…
Ah Jan, I'm sorry I couldn't make it. I had a family thing come up. But it looks like you and Marty had a fabulous time - and a great turnout. Congrats. I'm looking forward to reading your book. xo
November 23, 2009 at 7:50 AM