This is an actual line of feedback I received from my group of young readers while we were discussing my Dead Bird through the Cat Door manuscript – the second in the Megabyte Mystery series due out this fall. We all agreed that it’s not a good idea to use slang in a book because it goes in and out of style so quickly.

They pointed out words that were lame or words that kids wouldn’t use. One of my young readers went through and circled every word and phrase that she felt was lame. Which was very helpful. She said the word lame so many times that, at one point, I asked her if it was lame to use the word lame ;-j

When I asked what words or phrases to use instead, they came up with one word: ‘cool.’ Illustrating how slang goes in and out of fashion faster than pink shirts on boys. Cool isn’t a new word, in fact it’s an old word – dating back to the cool-as-a-cucumber eighteenth century – but apparently it’s withstood the test of time.

Be careful using jargon and slang, by the time your book is published it’s likely to be lame, old school, or out of fashion – just like pink shirts on boys (or still in fashion).

Here’s a picture of one of the main culprits Aviary Finch depicted by my nephew Logan. Aviary Finch is human, but has bird like characteristics. He’s the director of the bird sanctuary and is trying to get rid of the birds. Hmmmm … curious? I think so … 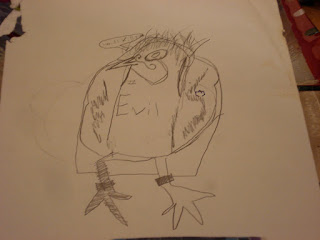 Jenny Woolf said…
It is true. I've sometimes thought one way is to make up your own slang. I always think Salinger coped with this issue very well in Catcher in the Rye
January 21, 2010 at 12:55 AM