I first heard about my nom on Facebook (maybe you've heard of Facebook - it's this little social networking thang). 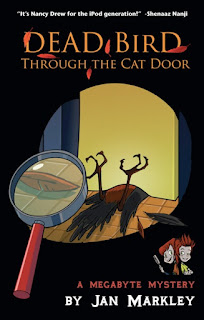 My friends started congratulating me for the nomination of my second middle grade novel Dead Bird through the Cat Door for the inaugural John Spray Mystery Award.


Then cut to a scene of me frantically googling myself, my book, and the award. Nothing! I thought I was loosing my stalking skills.

Little did I know that my writer peeps were all on the emailing list of the Canadian Children's Book Centre (CCBC) and got an email about a host of nominees for a wide range of children's book awards the centre administers.


Later that day the CCBC posted the press release.

The John Spray Mystery Award was established in 2011 to honour excellence in the mystery book format. John Spray, President of the Mantis Investigation Agency, noted that mystery books made him a passionate reader at an early age and helped him find his chosen career. It will be awarded annually to a Canadian author of an outstanding work of mystery writing for young people.
Check out the other books on the list and their authors. Marty Chan was nominated as well for his latest mystery The Mystery of the Cyber Bully.


You'll remember Marty from the Mystery Comedy Smackdown he and I had a couple of years ago, plus he's an all round good guy and an asset to the writing community! And he gave me a book cover quote for Dead Bird through the Cat Door.


Good luck to all the nominees. The winner will be announced in Toronto in October.

JennaQuentin said…
Congratulations!! Very cool!!! We'll be waiting to hear the news! Isn't it funny what you hear on Facebook? My sister told me she was pregnant on the stupid thing!
June 16, 2011 at 3:26 AM

Anne R. Allen said…
Major congrats! We live in a funny world, when you find out on Facebook before you're officially notified.
June 17, 2011 at 11:00 AM