Destined not to be the next Dead Frog on the Porch 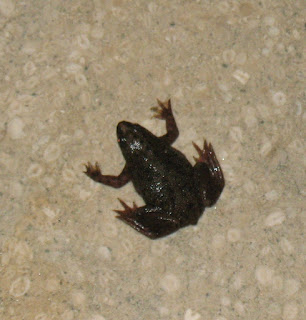 This is one of my friend Jane's pet frogs. She has three. She sent me a picture because she wouldn't let me near her frogs when I was at her house recently. You'll remember that my childhood friend Jane had the pet frog that was accidently killed by moi and served as the jumping off point for my novel Dead Frog on the Porch.
When I asked to hold the frog, Jane distracted me with crab cakes, salad, wine, and chocolate. (How deviously brilliant of her!) Jane's been very supportive of re-living her childhood trauma in the first few pages of my book. She was at the first launch and she will be at the second launch (she just can't get enough dead frogs) at Owl's Nest Books in Calgary on Saturday November 7th at 2:00 pm.
I was thrilled to hear that my novel will be reviewed November 7th by Leslie Horton on Global TV's Saturday Morning News show. She does a segment called "Leslie's Library." So I'll be up bright and early tomorrow to catch the spot at approximately 8:10 am.
I'm off to pick up the cake with the cover of Dead Frog on the Porch depicted in icing! Yummm! Here's to keeping those frogs alive ...
Email Post

Love the title of your book.

(I, too, would be easily distracted by crab cakes, salad, wine, and chocolate. mmmmmm.)

When we were kids, my brothers used to attach little frogs to their bicycle spokes and ride around. Ack! Boys...
November 6, 2009 at 1:57 PM

TerryLynnJohnson said…
That is awesome about the TV spot. I tried following that link to see what the program was all about but couldn't find it. Sounds like an amazing opportunity for you. Good job!
November 6, 2009 at 2:22 PM