“ … like that girl from London who wrote those books …” 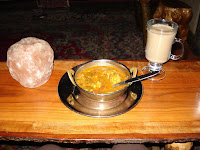 Here’s a picture of my pre-Vancouver Book Launch meal. It was in a little restaurant called East is East on Main Street. It’s lentil soup and chai tea (and a cool new agey candle). It was the best lentil soup I’ve had in my life and believe me, I know lentil soup. I make my own lentil soup and I routinely stalk other people for their recipies. I have soup for lunch almost everyday and if it’s not lentil … it’s lentil. And let’s not even open up the whole soup vs. stew debate. I asked for the recipe and they distracted me with a cup of the best chai I've had this side of Delhi.

Here’s my pre-Vancouver launch conversation with a random older guy on the platform of the new Canada Line (high speed rail line from the Vancouver airport to downtown - awesome!) I told him that I was in town for the launch of my novel ...

Random older dude: “So you’re like that girl from London who wrote those books, right?What’s her name?”

Random older dude: I was going to say J.R.R. Tolkien, but I guess you’re right.

Random older dude: But we don’t even know if it’s a girl, right? Given that it’s just initials.

Then random older dude sat with me on the train and told me about his idea for a cook book where he takes one recipe each from famous cook books and publishes them all in one cook book.

Me: I’ll keep an eye out for news of the law suit. Good luck with that.

The launch was at Once Upon a Huckleberry Bush and featured Gumboot Books fall release. Picture books were aRYTHMetique by Lori-Sherritt Fleming, Tiffany Stone, Kari-Lynn Winters and Scot Ritchie; Ready for R by Marian MacDougall and Silvana Belvilacqua; When Chickens Fly by Kari-Lynn Winters and Izabela Bzymek; the Fly Catcher Boy by Rebecca Kool and The Pirate Who Lost his AARRR! By Marcus Wild and Crystal J. Stranaghan.

Middle grade and young adult novels included Dead Frog on the Porch by moi; It’s All Greek to Me, Jack by Dan Bar-el; and The Midnight Blue Marble by Melanie Jackson.

If you weren’t able to make it out to the launch, don’t despair, the bookstore kept some copies on hand.

The Calgary launch at Owl’s Nest Books was well attended and thanks to those who attended. Here’s a pic. 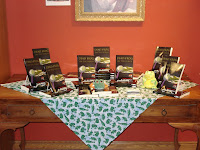 There are a number of upcoming events for Dead Frog on the Porch in Calgary and Edmonton.

It's an opportunity for Calgarians to discover the wealth of talent in their own backyard. I, along with nearly 30 other Alberta children's authors and illustrators will participate. It’s a great opportunity for children to meet local writers, chat with them about their work, and obtain an autographed copy of a favourite book. Get some Christmas shopping done and support local authors and illustrators! All participating authors will be reading from their work throughout the day.

This event is open to the public but is designed for teachers, librarians, and resource room teachers. A number of children’s authors will be presenting their books. Current CLRT members have been notified but not all teachers and librarians are members so spread the word.

Saturday November 21, 2:00 pm Edmonton @ Greenwoods' Book Shoppe (Small World) Children's author Marty Chan and I will be doing a Kid's Mystery Writer Smack Down. The event will pit Marty and I against each other in a Mystery Comedy smack down. 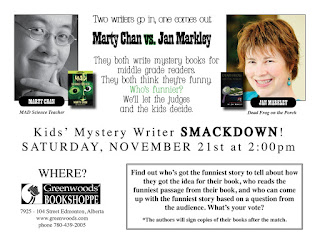 JAScribbles said…
You have hit the super duper big time!!