What does the Buddha have to do with character development? And why has Jocosa of the Earrings refused to cut her hair? 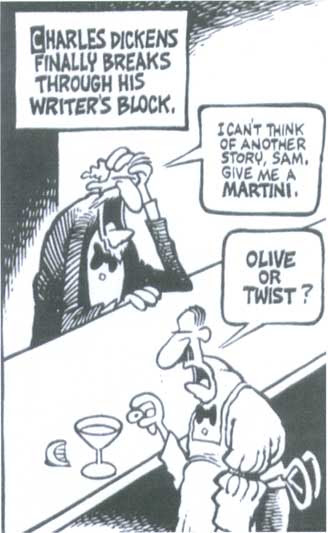 I attended a workshop by screenwriter Jeff Arch at the Surrey International Writers Conference.
He quoted the Buddhist principle that desire leads to suffering. Then he said: “we’re not the Buddha, we want things.” And by “we” he means your protag better want things. The most important quality your character can have is desire. You want your protag’s desire to cause suffering as s/he overcomes the obstacles to getting what s/he wants. What do your characters want? What will they do to get it? What will they stop doing to get it? What obstacles are they up against?
Your protag needs to want something tangible, not a concept like love (love can be a by-product of the protag getting what s/he wants).
Jeff drew two horizontal lines on the board. He labeled one ‘getting’ and the other ‘becoming.’ At the same time the protag overcomes the obstacles to getting, s/he is becoming (i.e., emotional growth of the character). The climax and the resolution are when the ‘getting’ story and the ‘becoming’ moment collide.
Jeff said, don’t start with theme; everybody wants a story. A story is about somebody wanting something. He says there are no bad guys in his screenplays, just obstacles.
I mentioned in the first post about Surrey, that my writerly friend Jocosa of the Earrings, from New York, pitched to Donald Maass. These were the earrings she was wearing for her perfect pitch to, as she calls him, the God of Agents. Jocosa writes woman’s fiction, not to be confused with fiction for Sasquatches (an under served market indeed). Donald suggested some areas to be strengthened by a rewrite, and asked Jocosa to send him the first 50 pages of that rewrite.
Not only does Jocosa wear awesome earrings, she’s prone to making life-altering statements in a state of glee over a request for the first 50 pages. Jocosa declared (and I and others witnessed) that she would not cut her hair until her book was published.
So I’m like “You mean when you get a contract, right?” and she’s all “no, I mean when the book is published. I need to put some fire in my belly.”
And I’m like “Yeah, so eat a dodgy taco or something. Because even if you got a contract tomorrow, it could be up to two years later when the book is published.”
And she’s all standing her ground “I will not cut my hair until my book is published!”
Well, you said it sista of the earrings and we heard it!
So we will follow her progress with, not only her rewrite and submission to The Donald, but her road to publication through the length of her hair.
I will get an updated picture every four months (with a different pair of awesome earrings displayed each time) until she is published. Relocation to a tower to be determined … 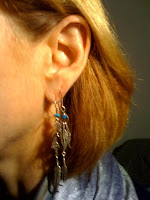 Carol J. Garvin said…
Nice earrings! Persistence is a necessary ingredient in the publication process so your friend is on the right track. Hopefully she has some ponytail clips to match the earrings, however, as it can take a l-o-n-g time.

I'm with Jeff when it comes to ignoring writer's block. I know it exists for some, but it you're a serious writer you can't afford the luxury of waiting until inspiration strikes.