Dead Bird through the Cat Door takes flight on Amazon! 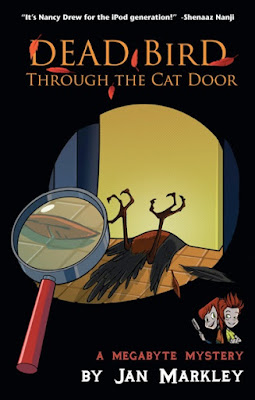 The friend I went to India with, Amber, says that all of my stories start with “Back in the 80s …” and by 80s she means the 1880s! Sure, a lot of my stories start with “Back in the 80s …” but I don’t think that things were better then. In fact, I’m loving what technology has done to book marketing and social networking.
That commercial is an analogy for social networking. Now a-days you can ‘tell two friends’ (and many more) through email, face book, blogs, twitter etc., with the click of a mouse. It’s much easier to get the word out far and wide.
Internet social networking is the super caffeinated, hyped up, you’re-not-in-the-80s-anymore-Dorothy version of that commercial.
This brings me to my point (yes, I have one thank you!). My second novel in the Megabyte Mystery series Dead Bird through the Cat Door is now available to be ordered on Amazon.com, Amazon.ca (ignore the part that says it's not available - it is available) and Amazon.co.uk.
It's a fun and suspenseful read for the 8-12 year olds on your holiday shopping list. It's also available as a kindle on the .com and .co.uk sites.
I’m requesting (nay, challenging) all of my blog readers, face book friends, twitter  followers and anyone who has access to email - to ‘tell two friends’ (and then some!), to fully launch my novel into the blogosphere! (or should that be the webosphere?!). Please leave a comment and let me know how you've 'told two friends!'

Congrats on being Amazon, I am with you on loving all the new technology! One of the biggest reasons? I have a Kindle...and now...I have your book (yeah, haven't made it all the way in to Calgary yet), and just read the opening (noooo on the birdie). Love, love the voice...it appeals to girls _and_ boys.

Candy Gourlay said…
i don't think i ever saw this on philippine tv - but you're on! as it happens i was planning a blog post that this would fit into perfectly. speak later!
December 8, 2010 at 9:24 AM

Talli Roland said…
Great stuff, Jan! I've just told one person (hubs) but sadly I'd have to go out on the street and scream it to let anyone else know. How's that for marketing strategy?
December 8, 2010 at 10:16 AM

Jan Markley said…
Hi Deb: Glad you got my book on kindle and you like the opening! And yes, both boys and girls seem to like my books!

Maybe you were lucky Candy and the Philippines was spared that commercial. I look forward to your blog post, thanks!

N. R. Williams said…
Congratulations Jan. How about coming on over to my blog next week and letting my followers know all about it. Either Thursday or Friday. My email is: gillael@aol.com
Nancy
N. R. Williams, fantasy author
December 8, 2010 at 8:38 PM

Lynda R Young as Elle Cardy said…
Wishing you much success! And yep, I was around in the 80s and yep I remember that commercial. LOL
December 10, 2010 at 2:03 PM