I'm back from the Society of Children's Book Writers and Illustrators (SCBWI) conference in New York city! It was fabulous and I had a great time. But I'm not going to tell you about it ... yet! I have a couple of time sensitive posts this week. Next week I will blog about the conference, and I will reveal the great climatological conspiracy that I have uncovered.
But first Groundhog Day.
Melanie Jackson is a Canadian author and editor (she was one of the editors on my debut novel Dead Frog on the Porch). She recently published The Midnight Blue Marble with Gumboot Books. It's an Ailie Mooney Mystery. 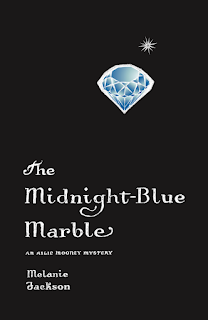 GLITTERING DEATH... 1793: French revolutionaries lop off the beautiful, if rather vacant, head of Queen Marie Antoinette. They claim the Queen squandered France's treasury to buy a sumptuous diamond necklace. Fast forward to the present: Vancouver history buff Ailie Mooney, 14, inherits from her eccentric great-uncle a packet of Marie Antoinette's letters - and a clue to the whereabouts of the infamous necklace's central stone, a.k.a., the Midnight-Blue Marble. Someone wants to figure out the clue before Ailie does. Using Marie Antoinette's letters, our determined, if perpetually disorganized, sleuth must hunt down the diamond before she becomes the next murder victim in its ever-bloody saga.
It's an awesome book. I've read it and so has my 12 year old niece who loved it!
The 14 year old protag in Melanie's book, Ailie Mooney has a blog and agreed to do a guest blog post in honour of Groundhog Day tomorrow. Here it is:
Begosh and begorrah, it’s Groundhog Day

In certain parts of Canada and the United States, a groundhog waddling out of his hole on February 2 will see humans gawking at him. Following a tradition of questionable logic, these eager folk are craning to see if the groundhog casts a shadow. If it’s sunny, of course, a plump, round shadow will spread around the groundhog. This should put everyone in a good humor, right? Wrong. It means wintry weather will continue. But, if the day is too cloudy to discern the groundhog’s shadow, sunny spring is near.

Being a Mooney, and therefore of Irish descent, I consider it a birthright to roll my eyes about strange Celtic beliefs. And, begosh and begorrah, yes, this one dates back to the very ancientest of the Celts. On February 2, which they called Candlemas Day, my ancestors contrarily interpreted fair weather as gloomy news, and vice-versa:

If Candlemas be fair and bright

Winter will have another flight If Candlemas be cloud and snow Winter will be gone and not come again.

Someone ought to have at least fixed the rhyme in that fourth line. 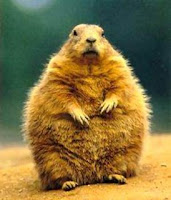 Thanks Ailie. Check out her blog. Cyd, the protag in dead frog will be doing a guest post on Ailie's blog in the future.

And no, that is not a picture of my niece's fat cat, it is a groundhog, and if it pops its head up around these parts someone might mistake it for a gopher and shoot it!

Okay, back to me. Next blog post: home made chocolate chip cookies, middle grade book club and getting voted off the island ...